The first few weeks of 2016 have been marked by an increase in share market volatility and continuing concerns about the Chinese economy. But as we look around the world there’s much to be optimistic about.

The US economy continues to grow and even Europe looks much better than it did 12 months ago. December will however be remembered for the long-anticipated first move up in US interest rates since the financial crisis. It was a volatile month in markets and while Australian equities and bonds finished higher, their global counterparts were both negative.

Returns on most asset classes over the calendar year 2015 were disappointing and below long-run averages. The best returns for an Australian investor came from having exposure to foreign currency through unhedged global assets.

Australian shares staged a late month recovery to finish up 2.7% for the month. The full year return for 2015 including dividends was just 2.6%.

The Australian government’s Mid-Year Economic and Fiscal Outlook (known as ‘MYEFO’) was released in December and it showed the impact of lower economic growth on forecast revenues. The impact of lower iron ore price assumptions alone accounted for a $7bn shortfall over the next four years.

While a return to surplus has been pushed out to beyond 2020, a peak of 18.5% in net debt to GDP compares favourably to most developed countries. This relatively low level of debt allows the government time to find solutions to deal with the longer-term increases in spending associated with the ageing population.

Official interest rates rose in the US for the first time since 2006 when the Federal Reserve voted to increase rates in early December. Most economists are predicting a second hike in March, but expect the pace of increases to be slow, with a cumulative rise of only around 1% over 2016.

The central bank’s decision had been well telegraphed to the market so long-term bond yields hardly moved, although equities had a weak finish to the year, falling 1.7%.

In a less well telegraphed move, the European Central Bank disappointed investors who had been anticipating a bigger stimulus package than what was announced in early December. European equities sold off 6.7%, halving their gains for 2015 and bond yields rose.

The Chinese economic growth story continues to be an important driver of markets and the transition towards a more domestic oriented economy will mean lower demand for energy and commodities such as iron ore. Manufacturing activity slowed for the 10th straight month in December, although the services sector remains strong. 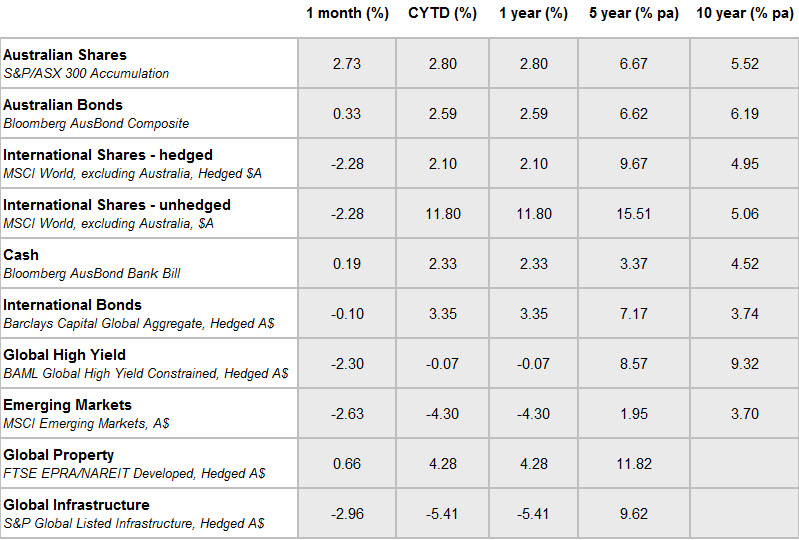 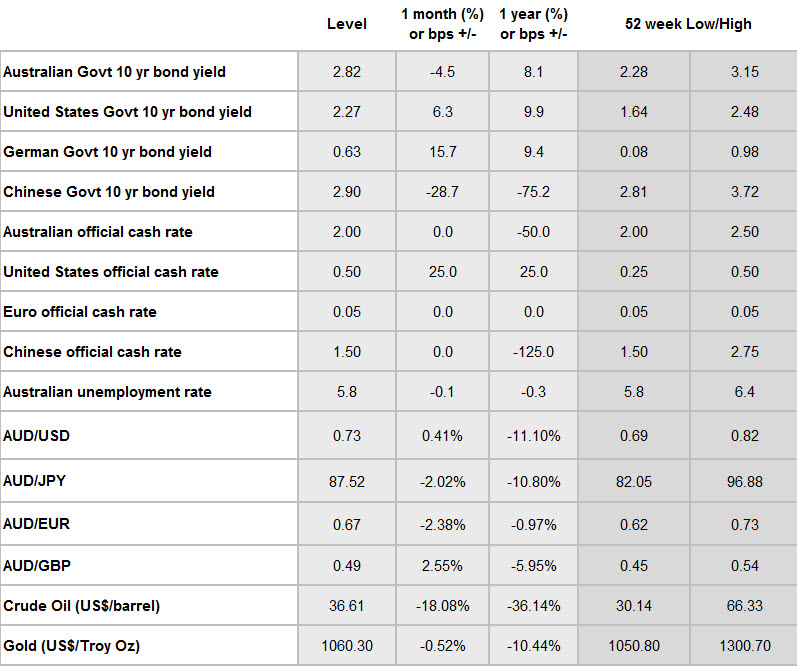