Should you switch to cash when markets are volatile?

It’s tempting to get out of the market during volatile times. But should you?

In early October, we had another bout of volatility on global share markets. This was caused by surprising results in a key US manufacturing survey that indicated we’re seeing the weakest conditions since the Global Financial Crisis.

So, it’s tempting to get out of the market during volatile times, but should you?

Why switching can be costly

The impact of investor sentiment on markets means they tend to fall sharply, and rise gradually, providing plenty of opportunity for media melodrama. When markets fell during the first few days of October, sensationalist media headlines spoke of billions of dollars wiped out.

But markets are large, so it doesn’t take much to get to a scary dollar figure. It’s difficult to ignore the media hype, and thinking about what might happen next can be worrying. Most of our clients choose to ride out the ups and downs, but those who do switch tell us that negative returns are the main trigger.

Unfortunately, this can be costly.

Clients who switched to cash during the GFC locked in a loss of 8.5%, on average.

During the Global Financial Crisis (GFC) of 2008, the extended period of market volatility caused some clients to switch to more conservative options like Cash.

Now, that may have initially felt reassuring as markets kept falling. But those clients locked in a loss of 8.5%, on average, at the time of switching.

And here’s the big red flag.

Of those who switched to cash, not many switched back out, so they missed the rebound in markets, as well as the subsequent decade of sustained growth.

To show how damaging this can be, let’s look at Susan and Bob*, a couple who retired just before the GFC. 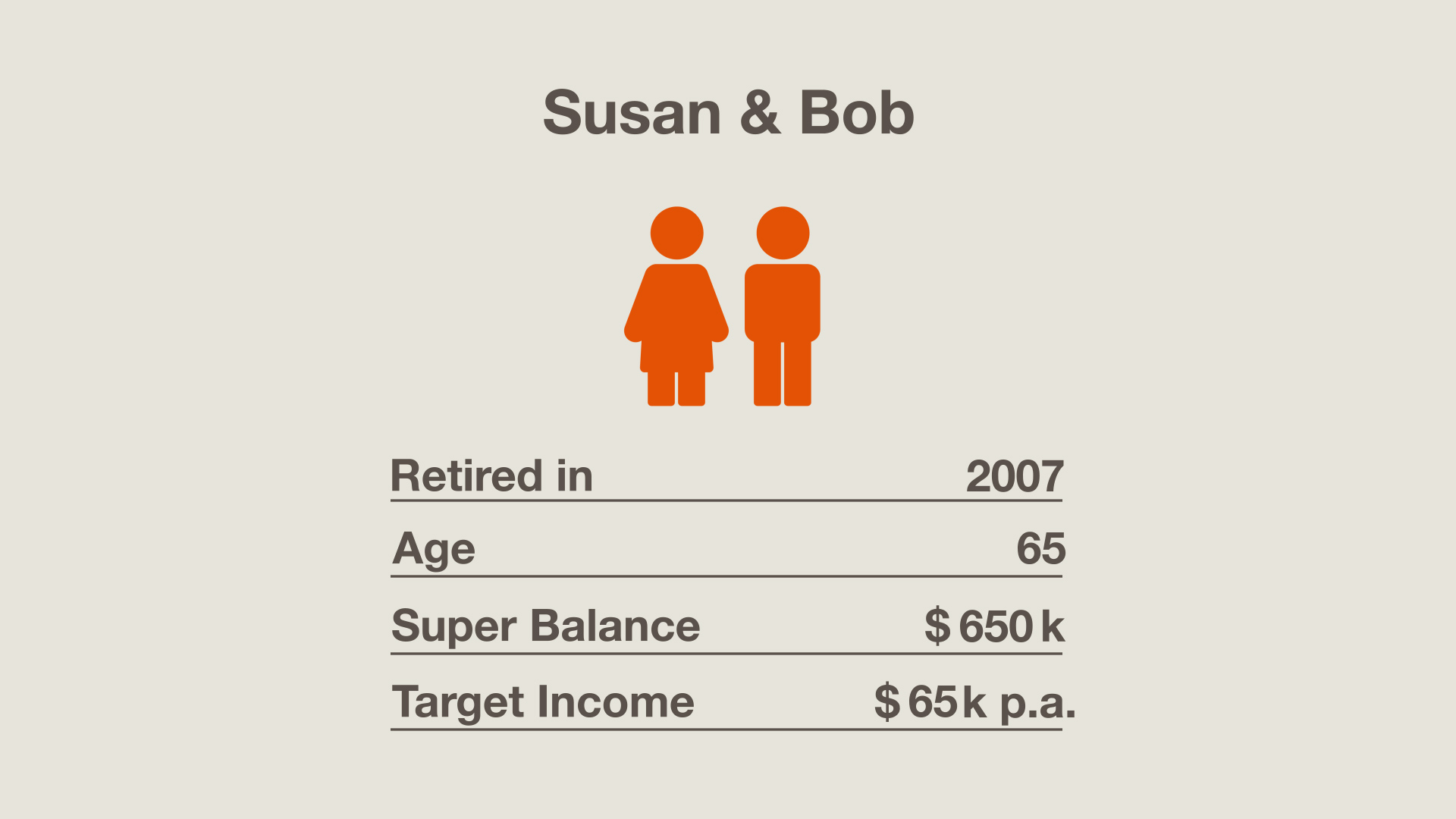 *Susan and Bob are a couple who retired aged 65 in late 2007 at the start of the Global Financial Crisis. They had a joint retirement balance of $650,000 at retirement, invested in the Balanced Fund. They’re targeting an income of $65,000 per annum indexed with CPI during their retirement. They do not have financial advice. Performance figures shown are after tax and all fees and charges. This is an illustrative example only.

Between their retirement savings of $650,000, and age pension entitlements, they’re targeting an income of $65,000 a year. Now this is a pretty healthy balance to fund their retirement lifestyle. 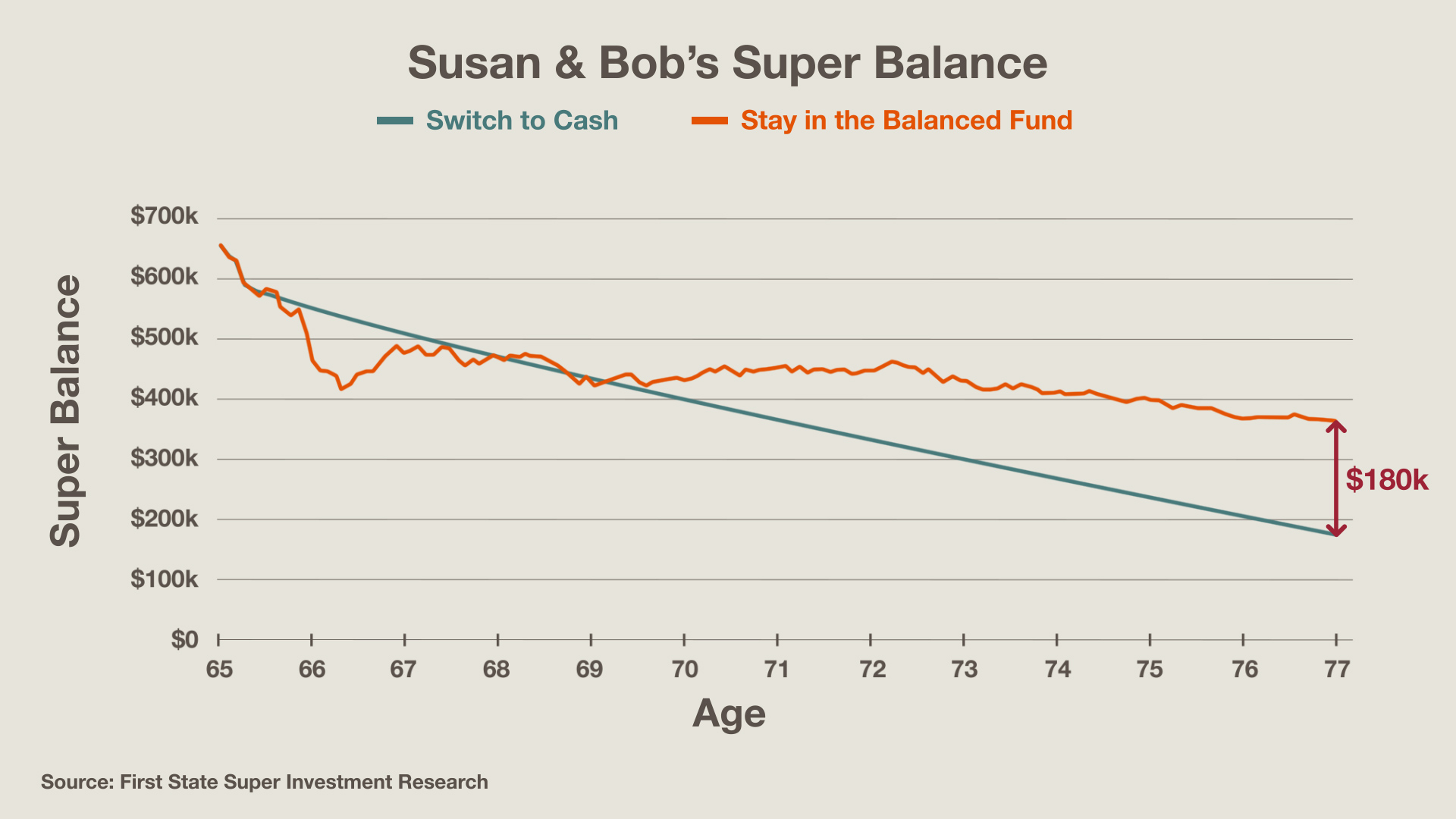 But if they had switched to cash during the GFC and not made the switch back 12 years later, their balance would be $180,000 lower than if they had remained invested in the Balanced Fund.

After switching to cash, Susan and Bob would have experienced less volatility. But their returns would also have been much lower.

As a result, they would need to lower their spending by 20%, or risk running out of money at age 83. This is a whopping 10 years earlier than if they had stuck to their financial plan.

It’s important to remember this is just one example based on our research of a typical client, and your personal situation may be different.

History shows that those who stay invested in growth assets end up better off than those who keep changing investment options.

Try to look past the daily headlines

History shows that clients who stay invested in growth assets, and stick to their long-term plan, end up better off than those who keep changing investment options.

The good news is, you don’t need to worry about monitoring markets and managing your investment choices.

We track the latest developments and adjust our portfolios, within specified ranges, to make the most of market conditions. This is all with the aim of maximising your long-term savings.

Susan and Bob are an illustrative example only, to demonstrate the key points... and we understand that everyone’s situation is different.

If your situation has changed or you’re feeling uneasy about the markets, your financial planner can help you with an investment strategy that remains focused on your long-term goals. 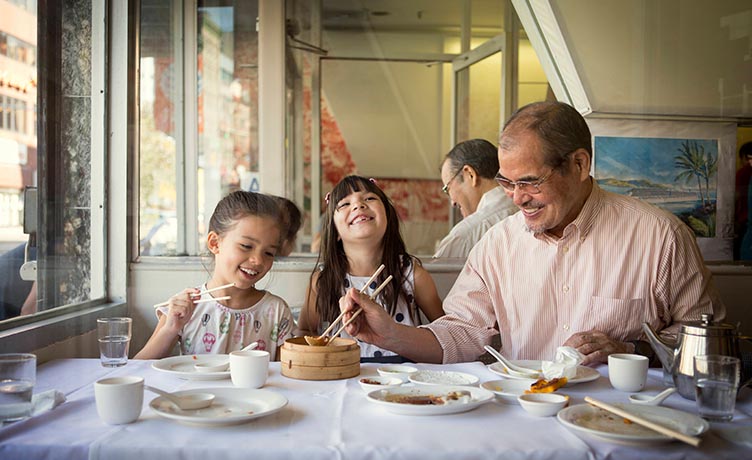 Why did shares do well despite a weak economy?

Markets were uncertain in FY2019 and interest rates are at an all-time low. Yet share markets have boomed. Why did investment markets behave so strangely and what does it mean for you? 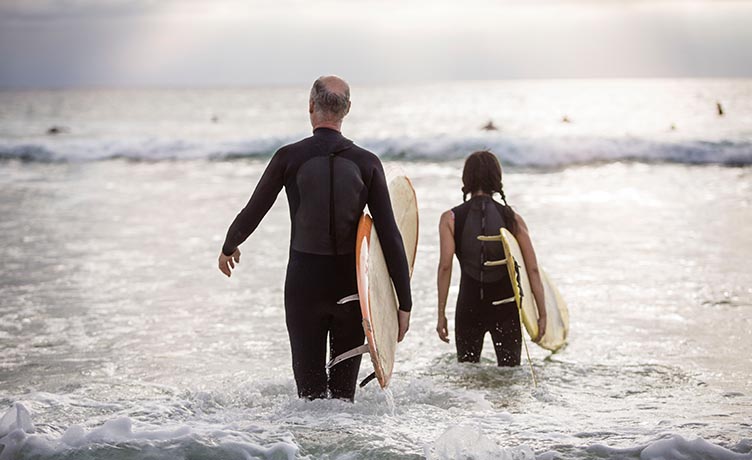 What is compound interest and why is it so powerful? What are the 3 ingredients needed to make it work and how can it help your retirement savings work much harder? 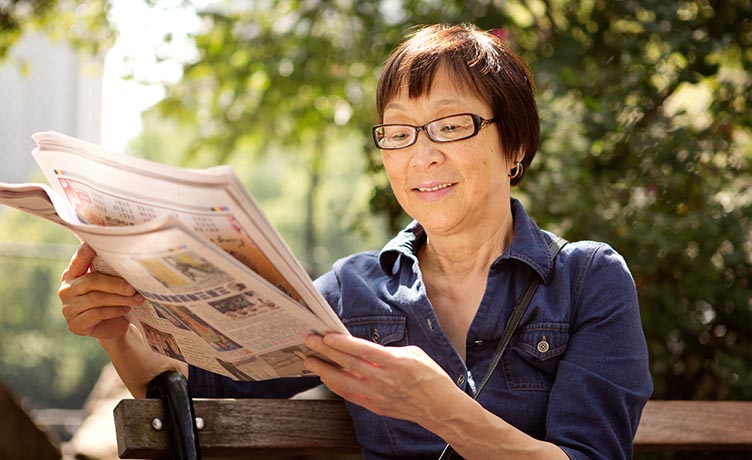