How does changing government legislation affect my retirement?

Australia’s superannuation industry is dynamic and is frequently affected by a number of factors, including:

In Australia, there are a number of separate acts, deeds and orders that can affect your retirement preparedness. It’s no surprise that keeping on top of changing legislation can be exhausting.

What legislation will affect you?

Federal budget results generally have a lot in store for Australians approaching retirement and current retirees.

Most recently, some significant changes regarding the age pension for retirees include:

Don’t forget that it’s also important to be aware of legislation changes from previous years. Some decisions can take a few years to be passed as law.

Navigating the numerous rules (and exceptions to the rules) is no easy feat. If you are approaching retirement, it’s a good idea to engage an experienced financial planner who can help you make sense of these changes.

For over 25 years we’ve helped more than 60,500 Australians like you on their retirement journey. So you can be comfortable that you’re in expert hands.

We have extensive experience in public sector superannuation schemes and we know how to leverage changes in legislation to deliver the best outcomes for your retirement.

Why not get a head start today?

Take a step closer to becoming financially secure and download our FREE Get ready for retirement in 5 easy steps guide. 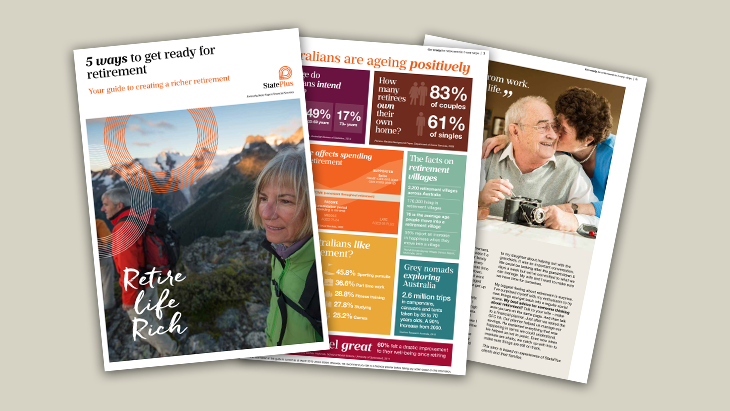 How could your retirement be affected?

It can be concerning to know that things out of your control, like legislation, can affect your retirement plans. Unfortunate as it is, the best way for you to remain in control is to stay informed.

Changing legislation can affect several aspects of your retirement including:

Your StatePlus planner has expertise in defined benefits schemes and retirement and will help guide you through your journey into retirement and life after retirement. Our priority is to give you peace of mind that you’ll have enough money to meet your needs.

Find out what this means for you

If you have some specific questions about how legislation might affect you, you can always call us on 1800 620 305. Alternatively, why not come along to one of our free seminars or download one of our free guides.

In a public sector super scheme?
Learn about how you could be managing your scheme, and your money, to make a genuine difference to you and your family.
Learn more
Attend a seminar near you
Start getting informed today at one of our pre-retirement seminars

Learn more about how current legislation might affect you before making any big decisions. Our seminars are complimentary, and we encourage you to bring a partner or friend.

Find a seminar
How to take control of your retirement
Feel you’ve left your retirement plans to the last minute? Don’t panic. No matter what stage of planning you’re at you an still make a difference to your retirement.
Read more